The purpose of this article is to provide additional insight for historians into the work of the 9-11 Commission, specifically, the first air defense hearing on May 23, 2003.

Previously, I discussed Colonel Scott’s presentation at that hearing in which he presented a slide that blurred the paths of the air defense fighters from both Otis and Langley.  NORAD had been tasked to explain the indirect scrambles from both Air Force bases.  That did not happen.

Here is the slide Scott presented as established in Commission work files on Oct 24, 2003. 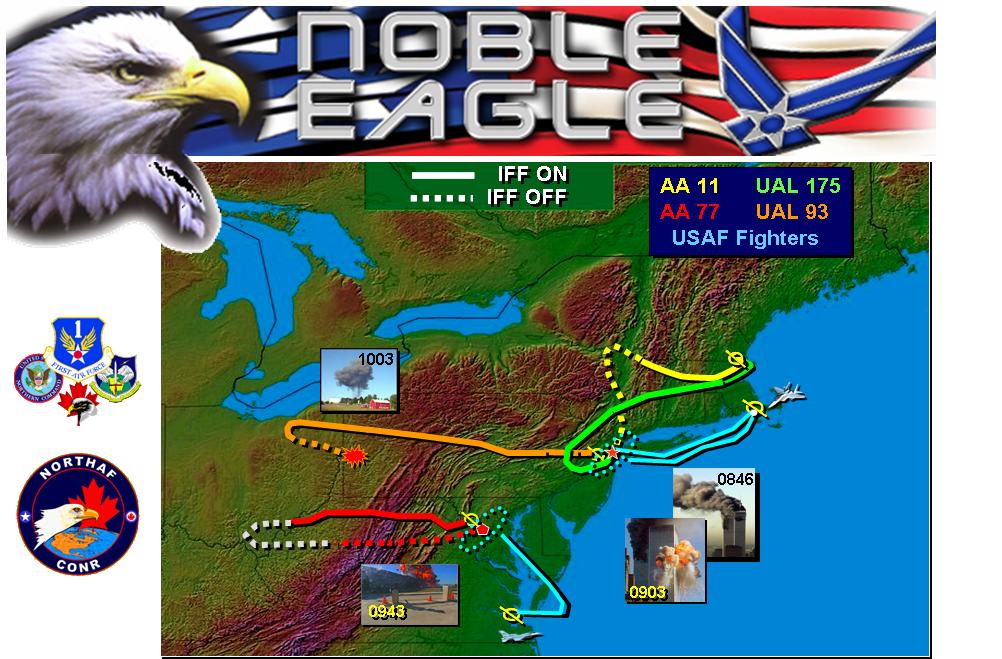 When I asked Scott during interview why he blurred the paths he cited the limitations of power point.  That was, and is, a disingenuous answer.  Most military officers in their careers, especially while serving on staffs, become “power point rangers,” masters of the art of depicting information visually.  Scott was no exception.  Moreover, he had access to the work of Cheri Gott who had accurately depicted the Otis and Langley scrambles for NORAD in preparation for its testimony, including Scott’s.  I linked to Gott’s work in an earlier article.

At some later time, most likely after our visit to Tyndall Air Force Base and our interviews with Scott, General Arnold, and General McKinley,  the Team 8 Leader, John Farmer, asked me to see how difficult it was to accurately portray the Otis and Langley scrambles using power point.

I found the task to be tedious, but straight-forward, well within the skill set of any staff officer.  Here is my revised version of Scott’s original slide, as established in Commission work files on February 13, 2004. 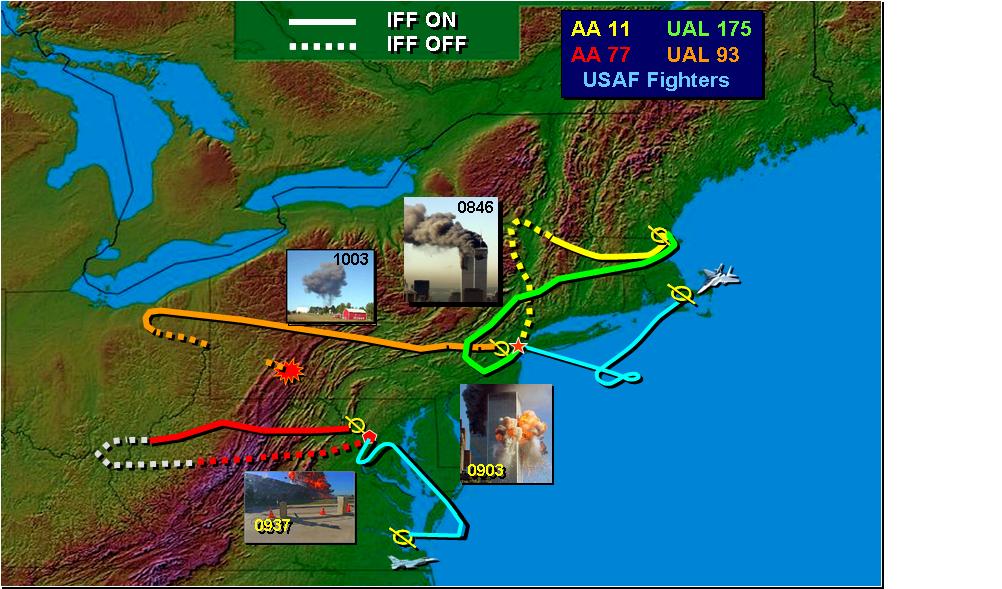 NORAD, writ large and at all echelons, never figured out what happened until we told them, one echelon at a time, beginning with NEADS (Marr), then CONR (Arnold and McKinley), and finally NORAD (Eberhart).  Arnold’s immediate reaction said it all, “that is a better story than the one we told.”

As a result of that inability NORAD never came to grips with the details of the Otis and Langley scrambles.  Therefore, Scott, a late addition to the hearing team, had little choice but to notionally depict the two scrambles.

I stand by the assessment I made in an unpublished 2006 letter to the editors of the Washington Post.  NORAD did not lie, they told the story as they understood it.  It was not a failure to tell the truth, it was a failure to figure out what the truth was.  It remains my assessment that the NORAD leadership (and FAA, by extension) fell victim to shoddy staff work, inexcusable then and inexcusable now.

The failure was a two levels, staff and command.  The staff didn’t get it right and command didn’t put the staff “through the hoops” to explain their findings.

So, what happened?  The story begins with the NEADS tapes.

The NEADS tapes, a fragile collection

NEADS attempted to transcribe its tapes soon after 9-11.  That effort, undertaken by a technician brought in for the sole purpose of transcription, ended abruptly when one of the tapes was apparently overwritten or erased.  Thereafter Colonel Marr, the NEADS Commander sequestered the tapes to avoid further damage.

That partial transcript would have been available to the testifiers and the staff that assisted them.  However, without the clarity of the primary source information, the tapes, the transcript alone was insufficient to the task at hand.  The NORAD staffs at all levels failed to get the story straight.

First, Colonel Marr did not release the tapes from sequester.  Nor did anyone at any level direct him to do so.  The tapes remained sequestered until DoD, at the specific request of the Commission, tasked NEADS to furnish them.  That task turned out to be non-trivial and NEADS could not deliver them before the Commission Staff’s first visit.  Piecemeal delivery during the Staff visit revealed the deficiencies in the partial transcript as the Staff attempted to reconcile the transcript with the tapes during interviews with NEADS personnel.  The net result was a subpoena.

Second, no one at any NORAD staff level asked for the FAA tapes pertaining to the Otis and Langley scrambles.  Therefore, no audio primary source evidence was available to prepare for NORAD testimony before the Commission.

Third, the NEADS staff and Scott did not do a zero-based review of the most critical document the MCC/T (Mission Crew Commander/Technician) log.  They used the log, as Scott made explicit at the May 23 hearing.  But they did not uncover the basic errors that were made in September 2001 when NORAD completed and published its timeline.

Fourth, it is not clear that the NEADS staff and Scott reviewed the radar files or even paid attention to the work done by Cheri Gott.  A simple review of that primary source evidence should have raised an alarm about the nature of the air defense response.

In sum, NORAD failed to adequately prepare for the May 2003 air defense hearing.  Rather than clarify they further confused the story, the first step on the road to a subpoena.