On the morning of September 11, 2001, I was seated at my desk on the 7th floor of the Department of Defense (DoD) Inspector General (IG) building, the”paper clip” building, at the corner of Eads Street and Army-Navy Drive in Arlington, Virginia. I was assigned to the Office of Intelligence Review as a Program Manager.

The IG building is the northeastern most office building in Crystal City and from the north side, where my office was, provides a direct view of the Pentagon, a couple hundred yards away across South Parking. After 9:00 a.m. most of us were trying to find out what we could about the emerging situation in New York City. I was focused on my computer screen when AA 77 slammed into the Pentagon at 9:37 a.m.

I heard a loud thud and the walls shook. I immediately went to the window and looked up, expecting to see the usual Air Force fly-by, a missing man formation in honor of a burial at Arlington Cemetery. Instead, I saw massive clouds of black smoke billowing out of the southwestern side of the Pentagon and saw multiple pieces of paper floating in the air over South Parking at about eye level. Retrospectively, what I did not see were any other planes in the sky in the vicinity of the Pentagon; there were none. Depicted here is my field of view and line of site in the immediate aftermath of the impact. 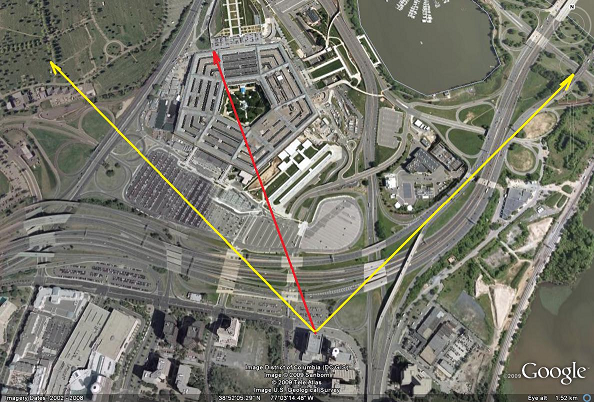 I recall walking out of my office and shouting to no one in particular, “what in the hell is going on here?” Our building was immediately evacuated and we ultimately ended up penned that afternoon in a large group near our building and just south of Interstate 395. We were subjected to false information and wild rumors. Our security people had been told that there were more planes, then one more plane. Traffic was at a standstill and no one thought to allow any of us to quickly get on the Interstate 395 access ramp, southbound, and to safety. Instead, we were frozen in place for several hours in the aftermath.

When it became clear that a Congressional Joint Inquiry would be formed and the identity of the Staff Director, Britt Snider, was announced I made the immediate decision to see if I could help. I had worked on several joint projects with the CIA Inspector General Office at the time when Britt was the IG. I called a colleague at CIA to see if Britt was hiring staff and she advised me to call Britt immediately at home as he was soon departing. I did that and as the phone rolled over to his answering machine Britt picked up, he had come back into the house to answer the call. Britt told me to meet him the next day and bring along my resume. We met over a cup of coffee, he never looked at my resume and simply asked if I was serious and could I be available. I went back to the office and gave the DoD IG two weeks notice and off I went into the uncharted waters of professional staff work for two commissions with finite tasks and finite time limits to do their work.

One thought on “Joining the Commission Staff”