Both aircraft departed Boston Logan International Airport. That departure point was carefully selected for a variety of probable reasons. Most important, it eliminated an uncontrollable variable for the attacking force, departure time delay. Whatever the delay, logically, it should equally impact two commercial aircraft taking off in the same time frame.

Also likely, but not certain, Marwan al Shehhi as a passenger aboard UA175, would be able to listen to cockpit air traffic conversations on Cabin Channel Nine. Anecdotally I was told by those I asked that access to Channel Nine was an individual pilot decision. My own experience both before and after 9/11 is that while flying United I was always able to access Channel 9. (The suite of cabin channels for passengers was eliminated several years ago as a result of the digital era.)

Perhaps most important, the choice of AA11 met a faith requirement. it was, after all, American Airlines Flight One One, verse one chapter one of the Koran. It follows that American and United flights were chosen as flying symbols of the United States of America. For example, Delta flight 1989 also met the time frame requirement but was not selected.

Here is a Google Earth screen shot of key data points. AA11 data points are in blue, UA175 in yellow. The broad trace of both flight paths is depicted in this overall graphic. AA11 flew to the Albany, NY, area and then turned south to target. UA175 flew nearly to Philadelphia, PA, and then made a gradual turn back to target.

After much consideration my current estimate is this depicts a time-based operation. Retrospectively, the attack window was 15 minutes separation, say 9:45-10:00. That explains al Shehhi’s flight well south and then gradual turn back. That time frame, therefore, became the window for AA77 and UA93 to be commandeered, regardless of takeoff delay. AA77 was commandeered in that window, UA93 was not. The 40-minute takeoff delay at Newark was too much to overcome. Ziad Jarrah, by my estimate, also had to wait until he cleared New York Center airspace, which he ultimately did.

UA 175 departed at the approximate time that AA11 was commandeered. It was 60 nautical miles due east of AA11.

The first evidence we have of detailed planning by Atta and al Shehhi is the turnoff of the AA11 transponder at 9:21 EDT, before the turn to target and while in Boston airspace. Thereafter, the transponder on each commandeered aircraft would be manipulated differently. The commandeers did not to know what would happen, or even care. All they needed to estimate was that four different transponder situations presented to four different Air Traffic Control centers would be problematic.

For Boston Center the problem was immediate, they could not hand the plane off to New York Center when it crossed the airspace boundary. AA11 was never handed off and as a result it was Boston Center not New York Center that prepared the AA11 accident report package for the National Traffic Safety Bureau (NTSB). To compensate, New York Center had to literally introduce a new airplane into the flight plan system, which they did. Thereafter, as indicated in multiple air traffic control communications, AA11 was referred to by its new name, AA 11 Alpha.

The second piece of evidence of tactical planning is Atta’s broadcast over air at 8:25 EDT, “We have some planes. Just stay quiet and you’ll be OK.” My consistent estimate has been that the transmission audience was, first, al Shehhi, to let him know that Atta had control of AA11. And, secondarily, to confuse the air traffic control system. That is a personal estimate based on the extensive, detailed planning for the operation.

The paths of AA11 and UA175 would eventually cross. As a result, Boston Center was using UA175 to try and determine altitude for AA11. Last known altitude was 29K and that figure stayed consistent in air traffic communications and, ultimately, in the scramble order for responding USAF air defense fighters.

At 8:37 EDT, Boston Center asked UA175 to look for AA11, with negative results. One minute later UA175 reported that they had “spotted the aircraft” at 28K or 29K altitude, confirmation of the last known altitude for AA11. UA175 was 13 NM to the northeast. As a result, at 9:39 EDT, controllers turned UA175 slightly north to avoid AA11.

The paths actually crossed North of I84 near the small town of Wiccopee, NY. AA11 was ahead, crossing that point at just before 8:38 EDT, southbound. UA175 crossed two minutes later, westbound. Spatially, UA175 was at 33K altitude, AA11 at 29K altitude, 4000 feet vertical separation.

UA175 was vectored back on course shortly before 8:41. AA11 impact at the World Trade Center, North Tower, was just minutes away. UA175 was still under crew command.

Thereafter, the sequence of events accelerated as al Shehhi needed to quickly commandeer UA175 prior to AA11 impact; my estimate.

By 8:42 EDT, UA175 reported to New York Center that they had heard suspicious transmissions on frequency, but wanted to wait until clear of Boston air space to make the report.

With reasonable probability, again my estimate, al Shehhi heard that communication.  Regardless, he struck immediately. That was the last transmission to air traffic control by the assigned crew aboard UA175.

That is the narrow window in which al Shehhi operated. FAA staff, in casual conversation with Commission Staff, offered that 8:43 EDT was the probable commandeer time. They had concluded that a discussion of that time with NORAD had occurred. It was the most likely source of NORAD briefing the Commission in May, 2003, that 8:43 EDT was the time of notification to the military of the fact of the UA175 hijacking.

UA175 was 37 NM northwest of the World Trade Center at an altitude of 33K. Geographically, UA175 was 3 NM east of Andover, NJ, just south of Lake Mohawk. The code change was clearly planned if the circumstances were right. Al Shehhi guaranteed that they were, just barely. 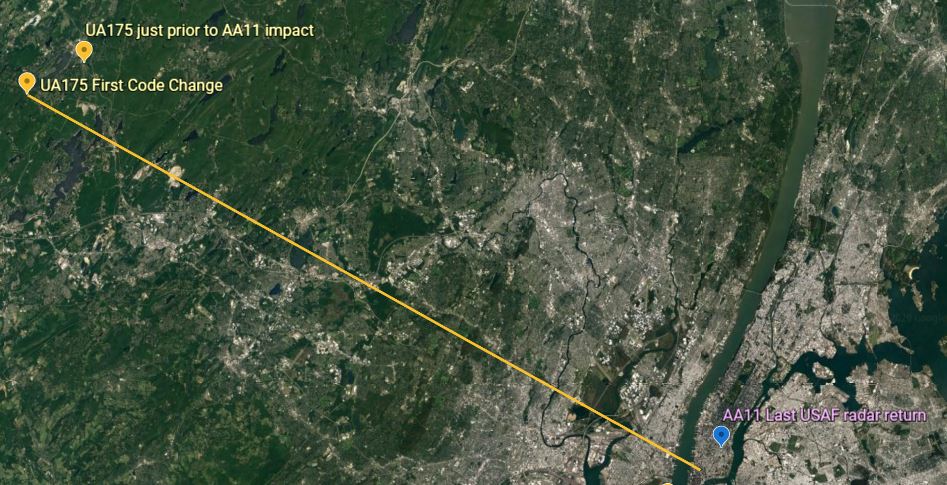 As was the case with AA11, yet a second commercial airliner had been commandeered for military purpose and converted to a guided missile. By changing the code al Shehhi had also converted the plane to be a ‘Mode C’ intruder.

Mode C intruders in the National Air Space System are not uncommon. Such an intruder is a transponding aircraft not associated with a data block on air traffic control scopes. Pilots often forget to enter new codes or mistakenly enter old codes. Air traffic control was quite familiar with the occurrence and had a set procedure. “recycle your transponder.”

ZNY made that request to UA175, but nothing happened.  Moreover, al  Shehhi had made a second code change to 3 3 2 1.

There was no tactical need for a second code change. The one explanation that makes sense is the Koran, Chapter 33, Verse 21, perhaps a favorite relevant verse for the known scholar among the attacking force.

The Qu’ran, Chapter 33 (The Combined Forces), Verse 21. “Ye have indeed in the Messenger of Allah a beautiful pattern (of conduct) for any one whose hope is in Allah and the Final Day, and who engages much in the Praise of Allah.” [Qu’ranic translation taken from the Quranic Arabic Corpus, Yusef Ali, English translation] (emphasis added)

Al Shehhi turned the plane around in the skies over Allentown, PA and to the East. Unknown to anyone UA175 did cross paths with UA93 then on climb out from Newark. A gradual turn South at 8:51 was followed by similar turns East and then North. A harrowing descent then followed beginning in the skies over Trenton, NJ.

USAF radar files show  how turbulent the flight was.  First, al Shehhi did not maintain a constant altitude, constantly varying between 32-34K. Then he began the descent just five minutes from impact with the World Trade Center, South Tower.  Rate of descent was 6000 feet per minute. For example, between 9:02:00 EDT and 9:02:37 EDT he dropped from 8K to 4K.

The final flight path was parallel to Newark and finally just East of the Statue of Liberty. It was Newark Tower that warned of the descent; they had a clear view up to impact shortly after 9:03 EDT.

AA11 and UA175 were a “Combined Force” on a “Final Day.”  At 9:03 EDT the nation knew it was under attack. Concurrently, Boston Center reported confirmation of Atta’s first broadcast on frequency, “We Have Some Planes.”

There was another “Combined Force” lurking for an attack on the nation’s capital. The only awareness anywhere was that Indianapolis Center had lost AA77, completely. Absent any situational awareness Indianapolis concluded the plane had crashed and by 9:10 had begun search and rescue procedures. The only effective responding force to the second attack was the remaining crew and passengers aboard United Airlines flight 93.

For the attacking force the changing of the guard was the flight path cross of two United Airline planes over Allentown, PA. Commandeered UA175 was inbound to complete the attack on the World Trade Center. UA93 was outbound with a short handed commandeering crew of four individuals as passengers not sure how to overcome the departure delay. They were to be a Combined Force with AA77 to attack the nation’s capital. Brave citizens made sure that did not happen.

Here is an interactive link to Google Earth. Click on any data point for a descriptive pop-up box. Copy and paste to your browser.