In a previous article I provided detail concerning the passing of Rules of Engagement (ROE) at the SD2 ISenior Director) position on the NEADS floor.  I have since found additional audio files in the NEADS collection that expand on that story.  My purpose in this second article is to put things in better perspective.

Some NEADS audio clips are taken from archived Commission files, either RDoD03012647 (NEADS 2 of 2 GSA Box 110) or RDoD04020857 (GSA Box 141 NEADS Dictaphone remake DRM1).  The individual audio files each have a unique Zulu time descriptor.  That descriptor is 20 minutes and 10 seconds off (slow).  That is a non-issue.  Channel 1, DRM 1 at NEADS was the time stamp channel; it allows precise determination of the time offset.

On  the second day, June 17, 2004, of the twelfth public hearing of the Commission, the Staff entered Staff Statement 17, “Improvising a Homeland Defense,” into the records of the Commission.  That Staff Statement remains the definitive account on what happened on 9-11 for several reasons, but one specific.  It was based on the transcript and tape of the Air Threat Conference Call, primary source documents not yet made public.

The public introduction of that Statement included an audio clip from the NEADS floor that established the first awareness of specific ROE authority at NEADS.  103200 Chat Log Shootdown Statement Words But the story began about one-half hour earlier and it did not involve AA 77.

Shortly after 1000 EDT the President’s Emergency Operations Center became operational.  At that time there were two aircraft of immediate concern.  First was UA 93 approaching the nation’s capital from the Northwest.  100303 AA77 Down SService Report a NW headed to DC Line 4530 Note that AA 77 is believed down in the Midwest and that the flight approaching DC is erroneously assumed to be a Northwest Airlines plane.

Second was an unknown aircraft over the White House.  The unknown was one of the Langley fighters.  The arrival of Quit flight of three over the Washington DC area became part of the chaos of the day, negative disruptive feedback.  As they arrived they set up a combat air patrol (CAP) which became confusing to both NEADS and FAA.  The flight lead turned left (West) just short of the Potomac River.  His wingman and trail both proceeded across the river and close to the P56 denied area before turning left into the CAP.  In the process either the wing man or the trail became an unknown, a target of interest.  The flight lead, Quit 25, returned back to the East at a lower altitude to check things out.  Here is that story as recorded by FAA 100641 ac over WH Story Part I and 100641 ac over WH Story Part II

Here is a draft graphic depicting the approach of the Langley fighters. Quit 25, the flight lead, has just turned back to the East.  Quit 26 began to enter the CAP over the District, Quit 27 over Maryland. 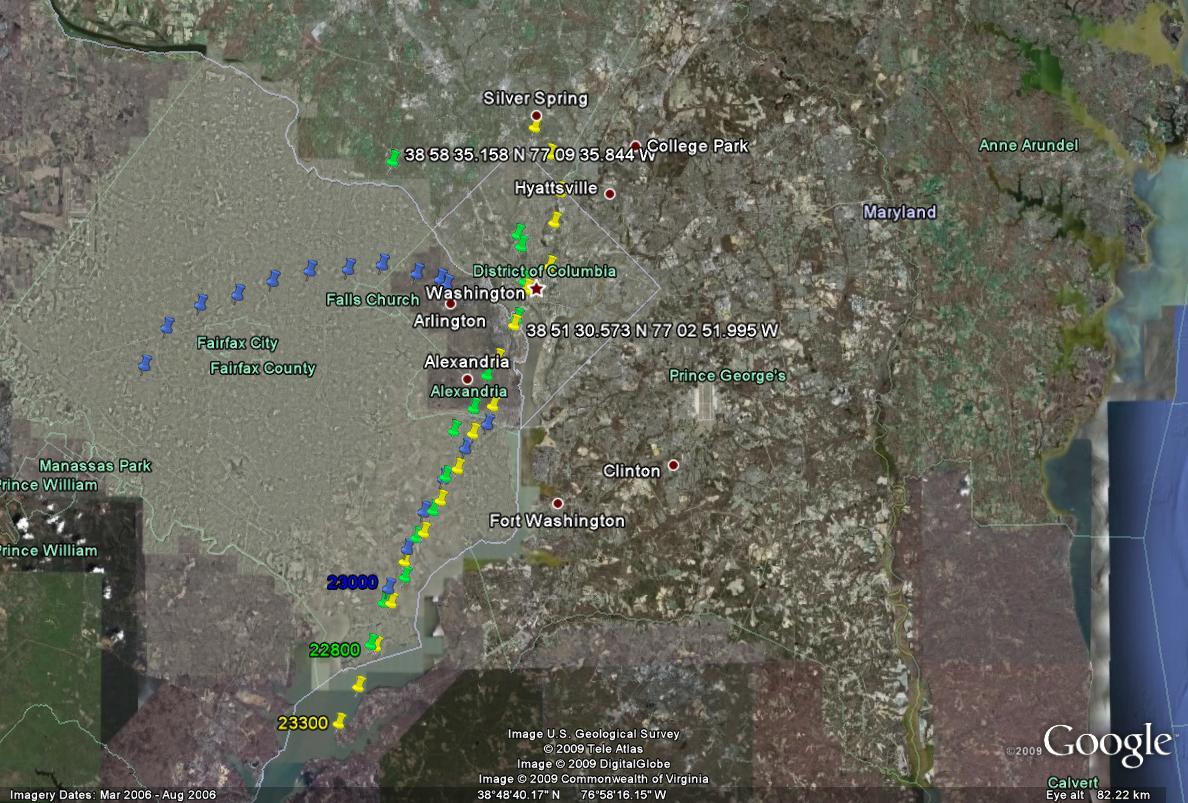 The combination of the two potential threats, one approaching from the Northwest and one directly overhead was apparently enough to order an announcement by Andrews Tower advising the Class B airspace was closed and that intruders would be shot down.  100403 Andrews Maddox Shootdown Pronouncement Local Control

According to my 2004 file title the voice is that of David Maddox, then OSIC (Operational Supervisor in Charge) of Andrews Tower.  At the time of the Commission’s work Maddox was assigned to Potomac TRACON, a new facility that replaced the TRACONs at four regional airports.  NARA has released my notes of that July 2004 interview (after the June 2004 hearing).  The notes are too cryptic to be of use but I did annotate that the interview was recorded.  My recall is that I played the audio recording for Maddox.  I would like to say, with about 75% certainty, that he got his direction from the Secret Service.  I don’t recall the details of that interview.

My best estimate is that the announcement was an interim measure, a warning on frequency, before the authority for shoot down could be established.  That estimate is consistent with events as they happened at both NEADS and at Andrews.  Maddox repeated his announcement at approximately ten minute intervals.  Here is the audio of the 1015 local announcement.  101557 Andrews Maddox Warning from Tower Local Control

What Are The Words

In the meantime, NEADS and its fighters in the air were asking for “the words,” the mission.  In this next audio clip we hear the NEADS floor dealing with the unknown over the White House. The controlled asked “intercept and what else.”  His plea for guidance was directed to Jamie [Major Fox], the Senior Director.  Note that the response on the NEADS floor was concurrent with them learning about UA 93 and a bomb on board.  100707 AC Over WH Intercept and What are Words

The answer came back “negative clearance to shoot.”  However, by that time they were concentrating on UA 93, trying to track it by mode 3, an impossible task since the plane was no longer transmitting a beacon code.  100901 UA93 Negative Clearance to Shoot

At 0933, after the Langley fighters were airborne, an unidentified person in the NEADS weapons section posed these questions.  “Have you asked the question whatcha gonna do if you actually find this guy?  Are we gonna to shoot him down if they got passengers on board?  Have they talked about that?  (added to article Apr 14, 2011)  We do not hear the answer.  0911131221 Whatcha gonna do

By at least 0946 local, at least one unit was questioning the authority to even launch fighters.  In this next clip we hear Sgt. Powell asking a Midwest unit to scramble on a plane east of Toledo [Delta 1989].  A Lieutenant Colonel questioned, “exactly what are we going to do?”  He followed that up with an additional question, “what authority was this coming from?”  Powell did not know and ultimately said it was coming from his commander, Colonel Marr.  0911132558 What authority is this coming from

Thirty minutes later another unit had concerns about the authority.  The Syracuse Commander called and requested to speak with Colonel Marr.  0911135441 Connect me with Col Marr The Commander wanted to speak to Marr because he had airplanes with hot guns that were going to launch and potentially shoot down American airliners.  He got Lt Col Daniels instead who gave him instructions with the promise that he or Col Marr would call again.  0911135712 Syracuse planes with hot guns

After the Vice President’s Guidance

Both NEADS and Andrews then dealt with what to do with the formal guidance as articulated in the CONR chat log for NORAD and as most likely passed to General Wherley at Andrews.

At Andrews, Major Hutchison was ordered airborne for a brief flight but without authority.  I told his story in an earlier article.  He was followed in the air by a pair of Andrews fighters, guns only, and with oral “weapons free” authority, according to General Wherley.  After 1100 local a second pair of armed Andrews fighters was airborne with pilots who had signed that they had “weapons free authority.”

At NEADS the demand for specific “words” continued because of specific situations.  I told the Midwest story in part I.  There was a parallel situation in the East over Boston.  Additional fighter from Otis were airborne with instructions to hunt for specific targets.  The pilots asked for current ROE.  The time was 1051 local.  0911145042 What is current ROE

(Note: in this clip and subsequent clips I have corrected the Dictaphone file to actual time.)

Less than a minute later he got his answer, “at peace.”  0911145137 At Peace That was quickly followed by very specific guidance from Major Fox that clearance to shoot was retained at NEADS.  0911145222 Request Clearance to Shoot

By this time the nation was at DEFCON 3 and the guidance to fighters in the air was that they were cleared to engage.  In this next clip Sting 11, who is being refueled by Steel 72, was told explicitly that he was cleared to engage; his response: “copy that.”  The time was 1219 EDT and his mission was to CAP Chicago.  0911155819 Cleared to engage Copy That

It is clear from this primary source information that the issue of shootdown authority had nothing to do with AA 77, but with UA 93 and other potential targets after the PEOC was operational.  Secretary Mineta was clearly wrong in his recall of the timing of events of the day.

It is also clear that the guidance was passed in the same time frame to both NEADS and, through the Secret Service, to Andrews and General Wherley.

An Additional Item of Interest

Shortly before 1030 local the Secret Service asked for Quit 25, the Langley flight lead, to be on a specific frequency.  We do not know the details of that request.  What we do know is that Quit 25 continued to respond to his chain of command.  The pilot told me during interview that, given a shoot down order, he would have authenticated more than once.  I asked Andrews interviewees if they had authentication tables, they did not.  102838 Quit Secret Service Wash Tower