A few months ago I created a list of linear processes that the government used or attempted to use on 9-11.  We will ultimately return to that list.

First, we need to build a separate list of critical times, expanding on a previous article under the category “times of interest”.

As we focus more closely on Chaos Theory concerning events of the day it is important that we have both lists; the processes and the times.  I list specific times, but the frame of interest will be a few minutes fore and aft.  We begin with the first declaration of a hijack.

FAA declared a hijack in progress.  Linear processes prevailed; it was considered to be a plane that would fly to a destination with demands to be met.  Notifications were made up the chain; the military was not notified.  Once it became clear to Boston Center, ZBW, that it would get no military help via the hijack protocol in place, the Center took action on its own recognizance.  That decisive action effectively short-circuited the protocol and, in terms of chaos theory, established ZBW as a focal point for the flow of information.  ZBW contacted Otis Tower at 9:34 and NEADS at 9:38, independent actions which led to NEADS being twice informed by 9:40 that assistance was needed.  More to the point, NEADS became another focal point for the flow of information, primarily via ZBW.

The linear process of managing AA 11 became nonlinear and chaotic.  What was a singular event bifurcated, twice.  First the northern attack bifurcated as New York Center, ZNY, determined that it had a hijacking in progress concerning a transponding intruder, code 3321 (UA 175).  Soon thereafter the main attack bifurcated into a southern component; Indianapolis Center, ZID, lost radio and radar contact with AA 77.

Terrorism is theater, according to Brian Jenkins since at least the early 1970’s.  AA 11 set the scene for UA 175 to enter, stage left, and show to a watching world that the attack was at once, horrifying, mesmorizing, and transcending.  Shortly thereafter, ZBW, determined that Mohammed Atta said, “we have some planes,” as in plural.  No one at ZID understood that their situation was something other than a lost aircraft.

ZID had by now notified its higher headquarters, Great Lakes Region, about AA 77 and had initiated rescue coordination by notifying the United States Air Force Rescue Coordination Center.  Concurrently AA 77 reappeared in the Joint Surveillance System, the series of radars supporting the air defense system.  The plane was trackable by NEADS; no one told them where to look, or to even look at all.  The possible became improbable.  Concurrently NEADS decided to preserve its assets and opted to put the Langley fighters on battle stations vice scrambling them.

Constantly alert for information that would help NEADS, ZBW either garbled or heard garbled information about the loss of AA 77 in ZID airspace.  Whatever the circumstance,  the result was that AA 11 was reborn as a threat to the nation’s capital from the north, a fact well documented in the primary and secondary sources of the day.  Meanwhile, AA 77 was bearing down on the capital from the West, unreported.

(Added Mar 16, 2010) Between 9:19:25 and 9:20:37 Denzel Simmonds at Herndon Center called the Dulles Traffic Management Coordinator, Mark Masaitis.  Here is that conversation. 091925 Herndon Dulles AA 77 Conversation There is no evidence that Masaitis as Traffic Management Coordinator was aware that an unknown primary track was approaching from the West.  He verified that AA 77 was not on the ground at Dulles.

During the conversation Simmonds broke in to say that they just had word a 757 disappeared off radar west of Virginia.  Concurrently, Masaitis can be heard saying that the plane was over Indiana. (/add)

Danielle O’Brien and her supervisor sounded the alarm about the unknown intruder from the west; an alarm that resonated all the way to the White House.  Concurrently, one of the Battle Commanders, Ben Sliney, began the second of two definitive actions to try and bound a chaotic situation.  He directed an airborne inventory of all planes in the air.  This followed a previous decision to ground stop all planes, nation-wide.  The inventory surfaced immediately the fact that UA 93 may have a bomb on board; the southern attack had also bifurcated.

No one at any level above Ben Sliney and Colonel Bob Marr, Sliney’s military counterpart fighting the battle, could help them.  The FAA’s primary net was still born; the NMCC was segueing from a significant event conference to an air threat conference; Richard Clarke had activated an SVTS conference which has yet to convene; and Norman Mineta was en route the White House.

In the next few minutes the military twice tracked the fast moving unknown, the only time any military asset would see any of the four hijacked planes.  NEADS quickly established a track, B-32, which soon faded as AA 77 slammed into the Pentagon.  The Minnesota Air National Guard C-130H saw the plane, identified it by type and followed it to its destiny.

I discussed this in an earlier article; the transponder on UA 93 was turned off, a final terrorist tactic.  Soon thereafter, the passengers and crew aboard UA 93 took matters into their own hands.

While working on part 1 of the UA 93 trilogy, the controller story at Cleveland Center, I drafted a summary of what else was going when the transponder on UA 93 was turned off.  The summary deserves its own time slot; it is filed under “Times of Interest.”

Recall that the transponders were manipulated differently in each of the hijacked aircraft and each manipulation presented a different problem in the National Airspace System.  Aboard UA 93 the transponder was turned off after the turn back to the east.

In this article we draw extensively on two sources; previous articles on Chaos Theory and the 84th RADES radar files. In one article I specified that the attack that morning was a battle in a larger war and that the Battle Commanders were Ben Sliney at FAA’s Herndon Center and Colonel Bob Marr at NEADS.  We established that they were not talking to each other and that the Battle Managers, General Arnold and Jeff Griffith, the next higher echelon, had neither the information nor the wherewithall to make that happen.  We also established that higher echelons were irrelevant and properly so.  Their job was to manage a war, not fight a battle.

Here is a Google Earth screen print depicting the seven minutes between transponder off to loss of coverage by the Joint Surveillance System radars supporting NEADS. 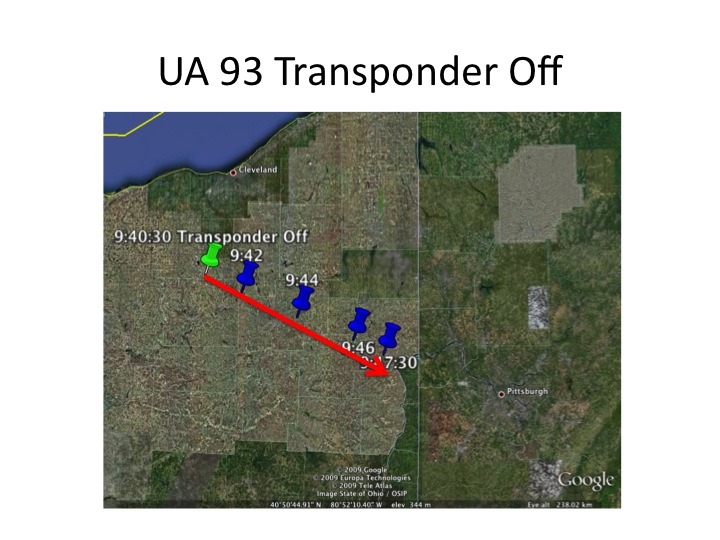 The UA 93 transponder was turned off at 9:40:30.  NEADS will have a seven minute window to establish a track.  UA drops out of NEADS radar coverage at 9:47:30.  It will not reappear until moments before it plummets to ground at 10:03.  At 9:47:30 UA 93 is just approaching the Ohio/West Virginia/Pennsylvania tri-border area.

Sliney and Marr are not in communication and cannot exploit the window of opportunity.  NEADS does not know about UA 93 and will not until after it plummets to earth.

NEADS did establish a track on Delta 1989 and  forward told that track to CONR and NORAD.  A few minutes earlier NEADS briefly established a track for AA 77 which it did not have time to forward tell.  Even earlier, it had learned about the rebirth of AA 11, as reported by Boston Center.  That fortuitous mis-report actually triggered the Langley scramble, which went astray.

At 9:40 the Langley fighters are under AFIO (Authority for Intercept Operations) and have been redirected toward the nation’s capital.  One of the three planes will fly directly over the Pentagon at 10:00.  Two of them will be captured on BBC video footage as they turn west over the nation’s capital to begin a combat air patrol.

Who was doing what

23,000 feet directly below the Langley fighter the NMCC is in an Air Threat Conference which it convened as the Pentagon was being struck.  The NMCC knows little of the approach of the Langley fighters, in itself a bizarre state of affairs.  They know nothing of the window of opportunity to track UA 93

The key agency, FAA, is not on the Air Threat Conference.  Concurrently, the NMCC is a participant in a CIA-convened NOIWON along with the FAA security watch seven stories below the FAA’s Washington Operations Center at FAA Headquarters.  No real-time information is available on that link

However, seven stories higher the FAA WOC is getting near real time information concerning UA 93.  That information is not being shared on FAA’s primary net because that net, activated at 9:20 to include the NMCC, was still born.  (I will speak to the primary net in a future article.)

Concurrently, Administrator Garvey, as of 9:40 is a participant in a just-beginning, closed-system SVTS conference with Richard Clarke.  She is disconnected from the WOC and is not aware of the near real-time information being passed by Cleveland Center via Herndon Center to the WOC.

No one at levels above Clarke is effectively engaged.  Secretary Rumsfeld has left his office for the Pentagon crash site.  General Myers has departed Senator Cleland’s office and is en route the Pentagon.  The Vice President is on his way to the PEOC at the insistence of the Secret Service.  Secretary Mineta is out of pocket en route the White House to join the Vice President.

At 9:40, the President is on his way to board Air Force One; he departs at 9:55.  It is his intention to return to the nation’s capital.  Concurrent with the arrival of the Langley fighters to protect the capital the President’s advisors and protectors recommend he not return.  At 10:10, with the nation’s capital protected, Air Force One turns west and heads for Barksdale Air Force Base.

During the fleeting window of opportunity for others to act, the passengers and cabin crew aboard UA 93 learn of the fate of other hijacked aircraft and of their own certain fate.  They take matters into their own hands.  They will do what no one else at any level can accomplish; they counter-attack, successfully for the nation, tragically for themselves.